Blade of the Darkmoon 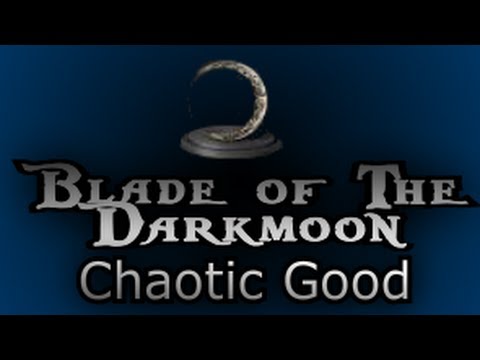 
The Blades of the Dark Moon is the in-game covenant that serves Dark Sun Gwyndolin, the last remaining deity in Anor Londo. By joining this Covenant, you agree to serve Gwyndolin as a dispenser of justice (or assassin), doling out punishment to those who break the rules of their respective covenants or otherwise earn Sin sufficient to open them up to being invaded by Covenant members. The Blade of the Darkmoon's primary objective is to assassinate other players who have betrayed their covenant or been indicted for killing other players, by using a list of names found in the "Book of Guilty" item. As the book's description explains: "The goddess of Sin Velka oversees this list of the guilty, who have disrespected the Gods or their covenants, and shall one day face the wrath of the Blades of the Darkmoon." Covenant members are empowered to invade the worlds of the guilty in two primary ways: (1) by using their Blue Eye Orb to invade any area of the game open to multiplayer interaction, or (2) by wearing the Darkmoon Blade Covenant Ring to be summoned by Gwyndolin into the Dark Anor Londo world of a sinner. In either instance, the Covenant member will appear as a blue phantom, and the victim will be informed that they have been invaded by "spirit of vengeance" followed by the Dark Moon Blade's user name. Successfully punishing a sinning player by killing them can (but does not always) result in the Darkmoon Blade obtaining a Souvenir of Reprisal, which is used to rank up within the Covenant. To aid his followers, depending on Covenant rank Gwyndolin will also give a Covenant member a powerful Talisman and weapon buff miracle, as discussed further below.
Players who are not in the Covenant are nonetheless encouraged to carry and use Indictments on players who invade and defeat them, as the resulting accumulation of Sin by their attackers will expose those attackers to being invaded in turn by vengeance-seeking Dark Moon Blades. Unlike Sin obtained from killing NPCs or betraying covenants, indictment-based Sin cannot be removed by speaking with Carim, and will forever mark the player as a target for the Dark Moon Blades.


Joining
Joining Video Walkthrough
1. You must have the Darkmoon Seance Ring, found in the Catacombs, in your possession. You must also have access to Anor Londo.
2. Go to the large rotating elevator in the middle of Anor Londo. Move the lever so that it makes the elevator go all the way down and continue down the stairs to reach the Darkmoon Tomb bonfire. (Note: This requires that you have the ability to move the elevator).
3. Equip the Darkmoon Seance Ring and the nearby statue will vanish. Go through the opening and down the stairs towards the fog wall, but do not enter. As you approach the fog wall you will hear Gwyndolyn speaking and when he is finished you will be able to kneel on the carpet in front of the fog wall in order to access the Darkmoon Blades covenant. ( Side note: You do not actually need to have the "Kneel" Gesture, this is a context kneel, just press A / X and you'll kneel.)
4. Accept and join the covenant.
5. You will receive a Blue Eye Orb and Blade of the Darkmoon ring that you can use for invading other players.

Darkmoon Blade Covenant Ring (pvp functionality)
This ring is gained by joining the Darkmoon Blade covenant. When wearing this ring you may be summoned into other players' dark Anor Londo as an invader.

Rank Requirements
The Blade of the Darkmoon covenant requires Souvenir of Reprisal to level your rank. This drops from people you kill that are listed in the Book of the Guilty, but however, it is not a guaranteed drop. Souvenirs of Reprisal will also drop rarely from Harpies in the Painted World of Ariamis.
Note: The increase of damage of Darkmoon Blade Miracle during Rank +2 and Rank +3 seem to be the same.
Betrayal Conditions

Note: Even if you have already killed Gwyndolin and Gwynevere, you can still be invaded in Dark Anor Londo.

The Blue Eye Orb can be used to attempt to invade sinning players in any area that permits multiplayer (i.e., not in the Northern Undead Asylum, Valley of the Drakes, the Great Hollow, or Ash Lake). An excellent place to invade is Tomb of the Giants.

Another excellent place to invade is Sen's Fortress, especially around level 50 or so.

Invasions in the Undead Burg or Parish at all levels (including both low level and up to 120 and beyond) can also be very effective.

Sunlit Anor Londo is also a popular place to invade. In addition to being themely for Dark Moon Blades to punish sinners in Gwyndolin's city, it has high player foot traffic at the right levels, and high levels of PvP.

Often times there will be people farming Dark Anor Londo invaders. You will often find yourself in a 1v2 or 1v3 when you arrive to Dark Anor Londo. There are a couple of ways to even the odds: